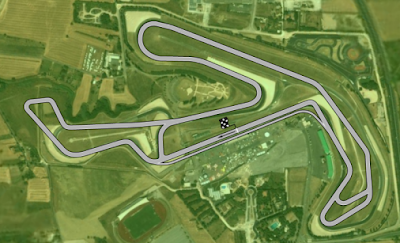 The Misano World Circuit (until 2006 called Circuito Internazionale Santamonica) is located next to the town of Misano Adriatico (Province of Rimini) in the frazione of Santamonica. Originally designed in 1969 as a length of 3.488 kilometres (2.17 mi), it hosted its first event in 1972. In 1993, the track length was increased to 4.064 kilometres (2.53 mi).
In 2007 it hosted the San Marino and Rimini’s Coast Grand Prix as part of the MotoGP World Championship for the first time.

Misano World Circuit was designed in 1969; it was built from 1970 and 1972, and inaugurated that year. Its initial length was 3,488 km and had a little and open pit area. This version of the circuit hosted three editions of the San Marino motorcycle Gran Prix, from 1985 to 1987. In 1993 it was modified for the first time: the track length was incremented to 4.060 kilometres (2.52 mi), with the possibility to race both the long and the old short loop; moreover, new facilities and new pit garages were built.

Between 1996 and 2001 all facilities were improved further, adding more pits and stands. In 2005, a new access point to the circuit was built, in via Daijiro Kato (Daijiro Kato street) in honor of the late Japanese pilot, killed during the 2003 Japanese Grand Prix, who loved to live in the frazione Portoverde of Misano Adriatico.

In order to host again the World motorcycle championship, the circuit was deeply modified in 2006. The circuit direction was changed to clockwise direction, the track length was brought to 4.180 km, track width has been incremented to 14 meters, facilities were improved, and all security measures have been applied. The first MotoGP race held on the circuit after the modifications was the 2007 San Marino and Rimini’s Coast Grand Prix, which was won by “home” marque Ducati.