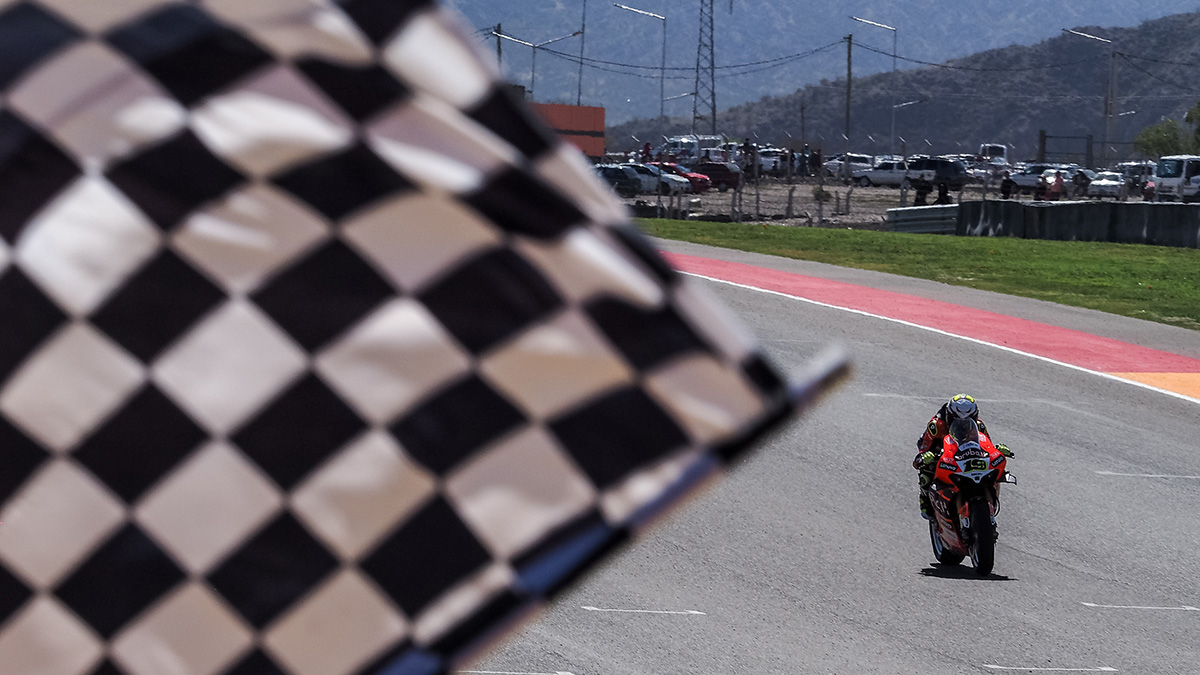 A dramatic start to Race 2 for the MOTUL FIM Superbike World Championship set the tone for the race at the Circuito San Juan Villicum with Spanish rider Alvaro Bautista (Aruba.it Racing – Ducati) took his second victory of the Motul Argentinean Round. The Spanish rider heads into the penultimate round of the season with an 82-point lead in the Championship standings, with Bautista able to take his first WorldSBK title next time out in Indonesia after beating Toprak Razgatlioglu (Pata Yamaha with Brixx WorldSBK) in Race 2.

Bautista had to fight his way back through the field after a poor start, which dropped him down to fifth place, and he picked off his rivals in the early stages of the race. On Lap 4, the Spanish rider made a move on second-placed Alex Lowes (Kawasaki Racing Team WorldSBK) into Turn 8 before making a similar move on teammate Michael Ruben Rinaldi (Aruba.it Racing – Ducati) a lap later. At the same time, Razgatlioglu who, like Bautista, lost out on the opening laps, was following Bautista through, with Razgatlioglu passing Lowes at Turn 10 on Lap 4 and then Rinaldi at Turn 1 on Lap 6.

Despite Razgatlioglu closing the gap throughout most of the lap to Bautista, the Spanish rider extended his lead down the long back straight and eventually pulled out a gap of around three seconds to the reigning Champion. Bautista’s victory gave him his 14th of his 2022 campaign and the 30th in WorldSBK, while it was also his 54th podium in WorldSBK. It was also Ducati’s 390th victory in the Championship. Razgatlioglu took his 77th career podium with second place and the 24th of his career, with Razgatlioglu now 83 points back from Bautista.

The battle for the podium places was between Lowes and teammate Jonathan Rea after the six-time Champion ran wide a couple of times in the early stages. Rea looked to pass Rinaldi at Turn 9 on Lap 2, which allowed Lowes through, before he ran wide again at the next corner and dropped down to sixth place. Rea battled his way past Xavi Vierge (Team HRC) at Turn 10 on Lap 6 to move into fifth before both Lowes and Rea passed Rinaldi on Lap 7. For the next 11 laps, Lowes was able to stay ahead of his teammate but Rea made the move at Turn 8 on Lap 18 to take third place for his 239th WorldSBK podium.

Lowes took fourth place, dropping around two seconds behind his teammate in the closing stages, although Lowes did have a four second margin to Rinaldi in fifth. Rinaldi was one rider who opted to use Pirelli’s SC0 tyre with most of the field using the SCX tyres. Xavi Vierge (Team HRC) put four manufacturers inside the top six as he took sixth place, with Rinaldi, Vierge and Iker Lecuona (Team HRC) in a three-way fight for fifth place. Lecuona finished two tenths behind teammate Vierge, who was seven tenths behind Rinaldi.

Andrea Locatelli (Pata Yamaha with Brixx WorldSBK) leaves Argentina with eighth place after a battle with Scott Redding (BMW Motorrad WorldSBK Team) in ninth place; the pair were separated by just one second at the end of the race. Redding led a trio of BMW riders as he finished in eighth place, with teammate Michael van der Mark in tenth, around one second down on teammate Redding, with Eugene Laverty (Bonovo Action BMW) in 11th; Laverty was the highest-placed Independent rider.

Garrett Gerloff (GYTR GRT Yamaha WorldSBK Team) was around two seconds back from Laverty as he took 12th place, while he had a more than one second margin to the returning Xavi Fores (BARNI Spark Racing Team). Fores marked his return to WorldSBK with three consistent results, taking 12th in Race 1 and the Tissot Superpole Race and 13th in Race 2. Rookie Philipp Oettl (Team Goeleven) was 14th ahead of Lucas Mahias (Kawasaki Puccetti Racing) who rounded out the points-paying positions.

Japanese rider Kohta Nozane (GYTR GRT Yamaha WorldSBK Team) finished in 16th place and missed out on a point by just over a second, while Loris Baz (Bonovo Action BMW) was 17th. Baz battled back from the rear of the field after he came off his bike following a Lap 2 collision with Axel Bassani (Motocorsa Racing) at Turn 12. The incident was investigated by the FIM WorldSBK Stewards with Bassani deemed at fault, with the Italian penalised with a Long Lap Penalty. However, for not taking this in time, Bassani was given a second Long Lap Penalty before he was given a ride through penalty for not taking his Long Lap Penalties on time. Bassani was classified in 20th place.

#ARGWorldSBK
Get All Our Latest News Sent Direct To Your Inbox
Join 30,271 other subscribers.
Follow on Social Media
Get the VROOM Podcast
Download our Vroom.GP App