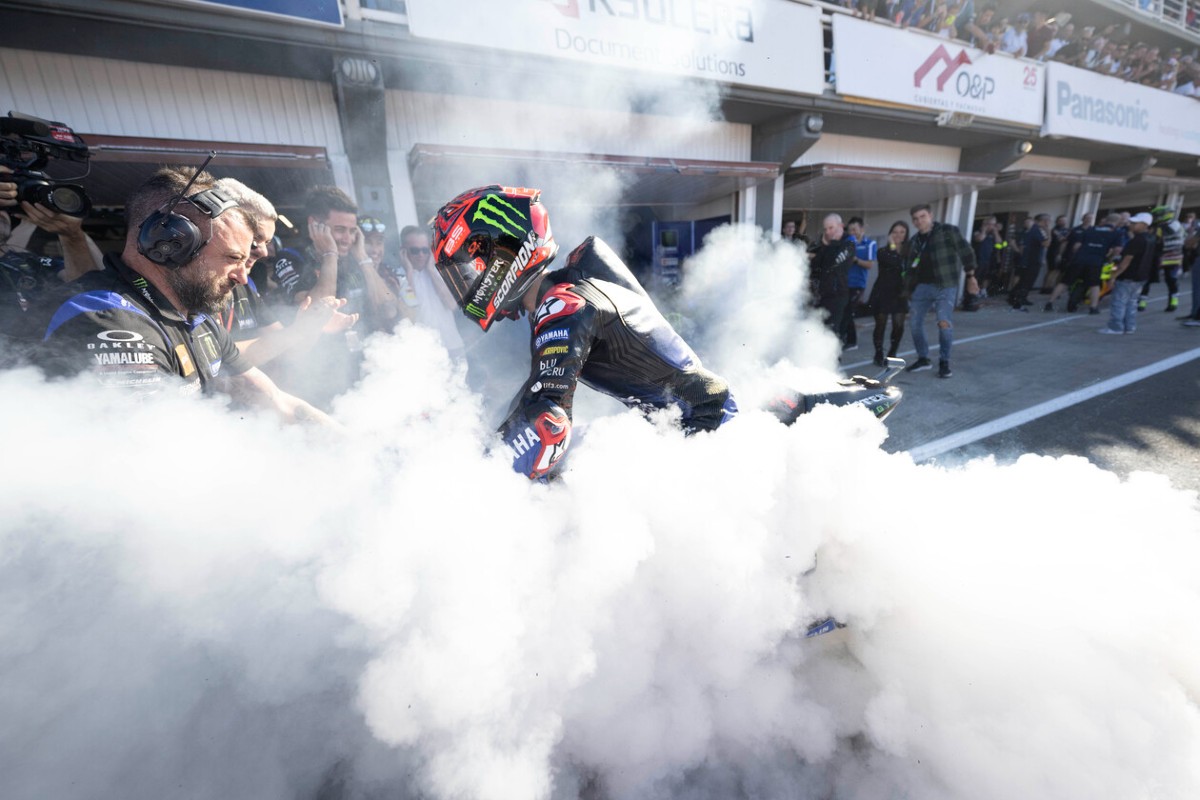 Monster Energy Yamaha MotoGP‘s Fabio Quartararo put in a brave effort during today‘s mission impossible at the Gran Premio de la Comunitat Valenciana. He went head-to-head against his main rivals and battled to a fourth place, finalising his 2022 MotoGP Vice Champion title. Franco Morbidelli was on a charge in the final laps and climbed up to a top-10 finish to end the season with some solid points.

Quartararo started from P4 but found himself in the middle of a clutch of riders all diving into Turn 1 at the same time. The Yamaha man squeezed through in sixth place and then commenced a hard battle with the Factory Ducati duo that even included some contact. The spectators were on the edge of their seats, especially as Quartararo and Francesco Bagnaia battled for fifth, swapping positions multiple times in the opening laps.

El Diablo and his nimble Yamaha proved to be the stronger package and managed to claim fifth after three laps. But the number-20 rider then had the task to close a 1.6s gap to the leading four riders. The defending champion put his head down and got to work. With Marc Marquez crashing out on lap 10, Quartararo was in fourth place and charging towards a podium. However, just as he was closing the gap, Brad Binder overtook him. They formed a group fighting for second place, but Quartararo was unable to make a move. As Jack Miller crashed out with five laps to go, the Frenchman pushed until the last meter of the race and ended the season just off the podium in fourth place, 1.911s from first.

Starting the race from P16, Morbidelli had to deal with the usual chaos in Turn 1 in the busy mid-pack. He handled the situation well and ended the first lap in fifteenth place. With other riders retiring from the race, the Italian moved up to thirteenth. He was stalking Marco Bezzecchi for several laps before making a move on lap 13. He made it stick and was on his way.

The number-21 found himself over 1.5s removed from the group ahead of him, but with two more riders crashing out, he moved up to 10th place in the final stages of the race. He was closing in fast on the next rider, which happened to be Bagnaia. With two laps to go the gap was 0.2s. Though a fellow VR46 Academy rider, Morbidelli took one for the team and kept the pressure on Quartararo‘s title rival, but in the end he finished behind him in tenth place, 14.676s from the front.

After today‘s race, Quartararo ended in second place in the Championship standings with a 17-point deficit and a 248 points total, while Morbidelli finished the season in 19th with 42 points. After Round 20, Yamaha concluded the season in second with 256 points in the Constructor championship, and Monster Energy Yamaha MotoGP placed fifth in the Team championship with 290 points.

Yamaha takes this opportunity to sincerely thank Quartararo and Morbidelli, all team members, and Yamaha engineers for their incredible efforts this year. Quartararo‘s Vice Champion title after a challenging season is an encouraging sign for things to come in 2023.

The team will be back in action at the Ricardo Tormo circuit on Tuesday for the first 2023 official IRTA test.

It was a tough race, especially for the left side of the tyre, but I gave my 100%. It was not enough to fight for the podium or the victory. It was hotter today than it was the previous days, and the left side of my front tyre went completely soft. That was the point where I lost the race. I’m a bit disappointed, but congratulations to Pecco for winning the title. Now I just can’t wait to try our new bike. But first we have to celebrate tonight. Then at Tuesday we have that very important test for 2023, and of course I’m really motivated because it concerns our future bike.

It was a good race. It was a good recovery! A lot of fighting and a lot of overtakes. I made a good comeback after I lost too much ground at the beginning. This is the moment to reflect on the season. I have to say ’Thanks‘ to my crew and my team, because they all hung on tight. When I was riding and knew it was difficult to extract potential from the bike, they stayed close to me, they always supported me. They always believe in me, and I always believe in them. They are working and kept on working to fix the flaws of the bike. We are all in this together. I‘m pleased to now be able to extract speed from the bike and be able to go from being a smooth rider to an aggressive rider. I‘m pleased about that and the atmosphere in the team. It was a tough season but with a happy ending.

#ValenciaGP
Get All Our Latest News Sent Direct To Your Inbox
Join 30,271 other subscribers.
Follow on Social Media
Get the VROOM Podcast
Download our Vroom.GP App