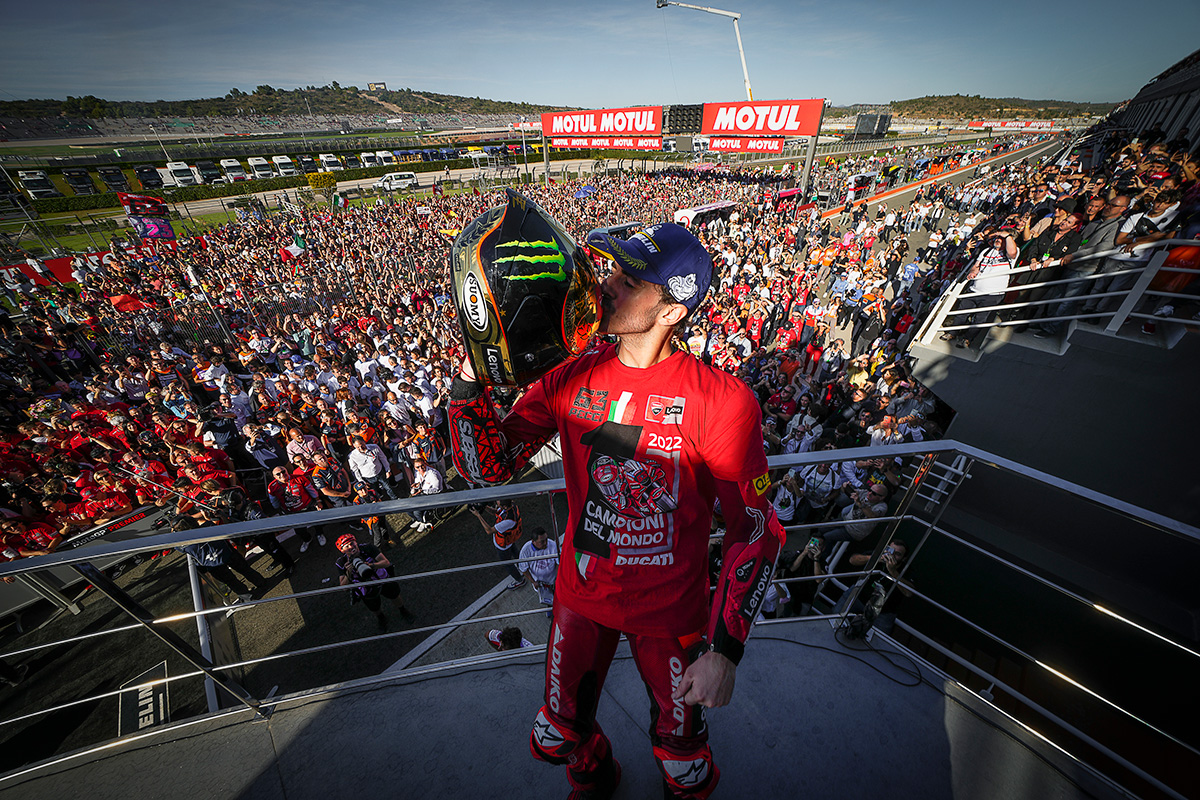 It was tense, it was close, it was emotional and it was a stunning finale for the 2022 season. As Ducati Lenovo Team’s Francesco Bagnaia took the crown with ninth place and Fabio Quartararo (Monster Energy Yamaha MotoGP™) came home fourth, it was Alex Rins (Team Suzuki Ecstar) who gave the Hamamatsu factory an emotional send off with a stunning final victory in blue. Brad Binder (Red Bull KTM Factory Racing) came to within one single point of the top five overall as he absolutely stormed to second, with Jorge Martin (Prima Pramac Racing) completing the podium from pole.

Rins qualified on the middle of Row 2 but made a brilliant start and led the field to the first corner, ahead of pole-sitter Martin and Jack Miller (Ducati Lenovo Team). Quartararo took a wide berth at the Turn 2 braking zone, emerging behind Marc Marquez (Repsol Honda Team) and in a battle for fifth with none other than Bagnaia. When Marquez attacked Miller for third on the opening lap, Quartararo squeezed his Yamaha down the inside of the Australian’s Ducati at Turn 8 as well, and he was up to fourth.

Miller hit back at the start of Lap 2, forcing Quartararo to pick up his YZR-M1 at Turn 2 with a pass which incentivised Bagnaia to also have a look. The title contenders made contact which pulled a wing off the factory Ducati in a sudden pulse of adrenaline, but Bagnaia was ahead of his key rival. It stayed that way until Lap 4, when Quartararo was down the inside at Turn 6 and back into fifth – but facing a task to catch the top four.

In said top four, Miller moved back into the podium positions when he passed Marquez on Lap 6 at Turn 1, before the eight-time World Champion crashed out altogether four laps later at Turn 8. In the meantime, Quartararo had shaken Bagnaia, who, due to some combination of caution and the damage from his contact with ‘El Diablo’, was on the fade. He had already been overtaken for sixth by Brad Binder when he gave Joan Mir (Team Suzuki Ecstar) an easy position on Lap 13 at Turn 14.

Up the road, Rins was trying to break away but the rest of the top five was compressing, which was both good and bad news for Quartararo given he was running fourth with a KTM ridden by Binder catching up. The Frenchman braked as deep as he dared at Turn 1 at the start of Lap 18 to try and keep the South African behind, but ran wide and was picked off by Binder at Turn 2.

Meanwhile, Miguel Oliveira (Red Bull KTM Factory Racing) was also through on Bagnaia, and soon Luca Marini (Mooney VR46 Racing Team) was as well. Enea Bastianini (Gresini Racing MotoGP™) then caught up to his future teammate too, and while there was plenty said ahead of the weekend, Pecco left a humongous gap at Turn 2 on Lap 22 to give it to ‘La Bestia’ and save himself any possible trouble.

It was more dramatic in the battle for the podium places, with Binder going past his own future teammate, Miller, on Lap 23 at Turn 2, then setting after Martin. Halfway around the lap at Turn 11, Miller’s last race with Ducati came to a premature end when he crashed out, handing over fourth spot to Quartararo again.

Rins had not quite been able to drop the field like he might have hoped, but was still nine tenths of a second to the good when Binder overtook Martin for second at Turn 4 on the penultimate lap. The South African threw a few more kitchen sinks at it but they would take the chequered flag 0.396 seconds apart as Rins delivered the final win for Suzuki in its current stint in MotoGP™, with Binder P2 and Martin getting home just over a second from victory. Quartararo was nine tenths further back after a valiant fight to the flag.

Oliveira would pass Mir for fifth, with the 2020 World Champion therefore classified sixth, ahead of Marini and Bastianini. Bagnaia found himself under pressure from Quartararo’s Monster Energy Yamaha MotoGP™ teammate Franco Morbidelli in the final laps but beat him to ninth position. Marco Bezzecchi (Mooney VR46 Racing Team) finished 11th, ahead of Tech3 KTM Factory Racing duo Raul Fernandez and Remy Gardner, then Takaaki Nakagami (LCR Honda Idemitsu) in 14th and Fabio Di Giannantonio (Gresini Racing MotoGP™) in the last points-paying position. Joining Miller on the list of retirements was Johann Zarco (Prima Pramac Racing) after a crash on Lap 16, plus both the Aprilia Racing entries of Aleix Espargaro and Maverick Viñales, both the Repsol Honda Team entries of Marquez and Pol Espargaro, and Darryn Binder (WithU Yamaha RNF MotoGP™ Team).

In a tense Moto2™ showdown in Valencia, Red Bull KTM Ajo ruled. Pedro Acostacame out on top to win the final race of the season and secure himself the title of Rookie of the Year, and teammate Augusto Fernandez shadowed him home to become the 2022 Moto2™ World Champion. Ai Ogura (Idemitsu Honda Team Asia) crashed out of second place on Lap 8, after which Fernandez went full gas for an attack on the win but couldn’t quite overhaul Acosta. Tony Arbolino (Elf Marc VDS Racing Team) led for much of the 25-lap race but would eventually complete the podium at the Circuit Ricardo Tormo.

Alonso Lopez (Beta Tools Speed Up) took the early lead from pole position, ahead of Acosta, Arbolino, and Ogura, who started the weekend trying to overhaul a 9.5-point deficit in the Championship. Fernandez took up fifth initially but lost the spot when Fermin Aldeguer (Beta Tools Speed Up) made an aggressive move at Turn 5, and that was certainly not the only aggression in the opening stages.

Acosta passed Lopez as they started the second lap, but the pole-sitter dived straight back at him at Turn 2, making contact as he took both well wide. Lopez would be handed a conduct warning for that but the bigger implications were Arbolino assuming the lead and Ogura second place as Fernandez was fifth – meaning the latter led the Championship, as live, by just half a point.

The battle between Lopez and Acosta continued until the former ran well wide on Lap 4 at Turn 8 and dropped to fifth. He had no chance to recover when he ran wide again just three corners later and then crashed out of the race, putting Fernandez’s live lead over Ogura up to 2.5 points. But then Cameron Beaubier (American Racing) passed the Spaniard into Turn 1 on Lap 6.

At the end of that lap, however, Ogura barely stopped himself from clattering into leader Arbolino at Turn 14, and Beaubier was then on the floor and out of the race, giving Fernandez some breathing space again. The Championship leader trailed third-placed Acosta by about one full second on the road, and the 2021 Moto3™ Champ looked to do his teammate a favour as he tried to pass Ogura on Lap 8.

The Japanese rider was either able to re-pass immediately if not resist Acosta completely, until the knockout blow came moments later at Turn 8. Ogura suddenly crashed out and his hopes were dashed, meaning Fernandez was able to cruise to the chequered flag if he wanted to. But he didn’t, and neither did teammate Acosta. The number 51 overtook Arbolino for the lead into Turn 1 on Lap 12, and Fernandez followed not long after.

The new Champion pushed him to the flag but Acosta scored the third victory of his rookie intermediate class season, with Fernandez taking second and the crown. Arbolino completed the podium for some more good form after his Sepang win.

The final Moto3™ race of the season was a spectacular farewell, with a duel for the win going right to the wire. The battle saw reigning Champion Izan Guevara (Valresa GASGAS Aspar Team) go toe-to-toe with Deniz Öncü (Red Bull KTM Tech3) throughout the final lap, with the Turkish rider ahead into the final corner and Guevara going wide to gas it to the line – and come out on top to sign off from the lightweight class in some style. Gloves off, and show spectacular to the flag.

Adrian Fernandez (Red Bull KTM Tech3) took an impressive sixth, ahead of David Muñoz (BOE Motorsports) and next rookie home Diogo Moreira (MT Helmets – MSI), with the Brazilian securing Rookie of the Year with the result despite a Long Lap on race day.

#ValenciaGP
Get All Our Latest News Sent Direct To Your Inbox
Join 30,271 other subscribers.
Follow on Social Media
Get the VROOM Podcast
Download our Vroom.GP App