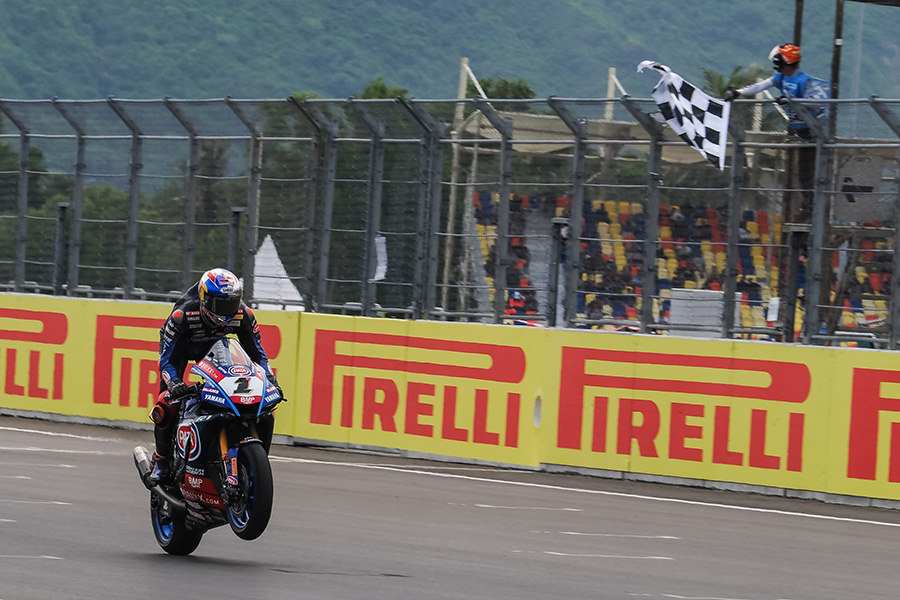 “Today, I am very happy because we are very strong. In FP3, it was a very good lap time and in Superpole it was an unbelievable lap time! For me, it was important to win the race. It was good for me but not easy for anybody because of the very hot conditions. In the race, I made just one mistake, but I didn’t crash. In corner six, I touched the dirty line and in corner seven I closed the gas because the rear was sliding. I felt the sliding after I touched the gas. I went wide because it wasn’t possible to turn. Afterwards, I remember Marc Marquez who had a very big crash here. Always, I am just scared of corner seven because you have just one line and you try to ride this line. You are always thinking this but sometimes make a mistake.”

“Today, I’m happy with second position. I think it was the maximum we could achieve today. For sure, Toprak is very strong this weekend and the pace was amazing. Sincerely, I didn’t expect this pace for all the race, maybe in the first lap doing ’33s but then slow down, but he could keep the pace. In the end, I didn’t have such a good Superpole because I had some troubles during the session, and I couldn’t make a perfect lap and started from fifth. I had a good start, I gained some positions and then at the beginning, with 60 centimetres of good asphalt, it’s easy to make a mistake. So, I just wanted to be clam at the beginning, try to not make mistakes and to not go out of the good line. Then I started to fight with Andrea and Jonathan. When I was second, Toprak was first with a gap. But even if I had been closer, I don’t think I could have caught him because his pace was really good. I tried to keep focused and do my best. And today the best was finish second so I’m happy for that.”

“The race was better than expected. Yesterday I had a really difficult Friday. I was riding the bike, not in a nice way. I was very aggressive on the bike with the low grip surface. Step by step, my team understood how to make changes, how I needed to ride, and it really helped me. Today I was much closer to fighting with Toprak in the beginning today, and then with Alvaro a little bit. I didn’t expect to be there. A podium was my target. We achieved that. I think we can learn a lot more for tomorrow to try to make changes to the bike, generate some more rear traction. Today I was worried about my front tyre, it didn’t look good but in Parc Fermé it looked so much worse than the others. Everyone is struggling in that area, but rear traction we need to try to improve for tomorrow. We’ll put our head together and try to improve there for tomorrow.”

“It’s a positive day for me and my team. We worked hard from Friday. Unfortunately, during the race, I lost the opportunity to follow Jonathan and Alvaro because in the end my rhythm was similar to his. We’ll try again tomorrow. I’m really excited to have had my first front row, it’s important for me, for my future, and to believe in myself. In the end, it was a positive day and we’re looking for tomorrow. I think we can finish the weekend in a good way.”

“I started quite well from a bad position. But then in the first laps I couldn’t do my pace. I wasn’t feeling good with the bike. But then after six laps, the bike started to feel really good. So, I started to push, and I overtook the other riders until five laps from the end, I overtook Locatelli and was fourth. But then the last three laps, I had a huge drop of the rear tyre, and I couldn’t turn, go inside of the corner with the angle. For sure, I’m happy about the pace in the middle of the race because it was similar to the top guys. So, I’m happy about that. We need to improve the first five laps and the last four laps. And if we can do that, we can fight for the podium tomorrow.”

“It has been a really difficult day. The track is getting better every session so it’s really difficult to understand the changes on the bike, if we’re going in the right direction or not. But anyway, I think we are doing a good job. We had a solid race. It was important to not make mistakes. We are missing a little bit to try to make a step forward to try to fight for a better position tomorrow.”
WorldSBK action resumes on Sunday from 08:30 (Local Time) with the Warm-Up, followed by Tissot Superpole Race at 10:30 and Race 2 at 13:30.

With 437 points, Dominique Aegerter (Ten Kate Racing Team) was crowned WorldSSP Champion for the second time as he finished in fourth place.

Reflecting on his 2022 season, where he also won the MotoE™ World Cup to take two world level titles in one calendar year, Aegerter said: “A fantastic job we did this year. Three races before the end, we got the second World Championship. We also got the MotoE™ title. We had 15 race wins, 17 podiums and my worst place this season was a fourth place when I finished the race. We had a fantastic season. For me, a second dream come true to be World Champion again. I want to dedicate this Championship to my family, my friends, to all the sponsors, the Ten Kate Racing team and Yamaha. They helped me to be there and I hope, next year, we can continue in a good way. I’m feeling ready to jump up to WorldSBK and I can’t wait to ride it for the first time in December with the GRT Yamaha team.”

“It’s been a great day. Pole position and a victory like in Magny-Cours 2017. It’s been a long time since the last victory and even since the last podium last year. This year has been difficult. We have a new bike, I had a really bad injury with my toes. It took a bit of time to recover but I did my best from home to train. In Portimao, it was already better. In Argentina, I had a chance to be on the podium, but I made a mistake. Today I feel really strong. I was here really fast last year but now we have a better bike. I’m really happy. Thanks to my team!”

“I’m really happy about today because I was angry after Superpole because I was fighting for pole position, but I crashed. In Race 1, I really wanted to do better. It was a very hard race because of the hot conditions, and the track layout … it’s very difficult for the body with lot of changes of direction. It was difficult also because our front tyre dropped 80% after six laps. I managed to not make any mistakes for the whole race. I’m very happy. Now let’s wait for tomorrow because I think we can do better.”

“Yesterday was really difficult for me. Today I woke up and I thought ‘yes! Today is a good day’. We did a good qualifying and then Kenan called me and told me ‘come on, you can do it!’, he trusts me and told me I could win the race. But I lost so much grip. Thanks to everyone who supported me! We didn’t crash and we have one more podium. I think we increased our gap in the Championship standings so I’m really happy.”

The newly crowned World Champion Dominique Aegerter crossed the finish line in fourth place. He first battled with Nicolo Bulega (Aruba.it Racing WorldSSP Team) as he made the move at Turn 16 on Lap 16 before he chased down Yari Montella (Kawasaki Puccetti Racing). The pair battled hard right until the line with Aegerter wrapping up the Championship with fourth place; just 0.008s ahead of Montella. Montella himself had a four-second gap to Bulega as he took sixth place.

#IDNWorldSBK
Get All Our Latest News Sent Direct To Your Inbox
Join 30,271 other subscribers.
Follow on Social Media
Get the VROOM Podcast
Download our Vroom.GP App