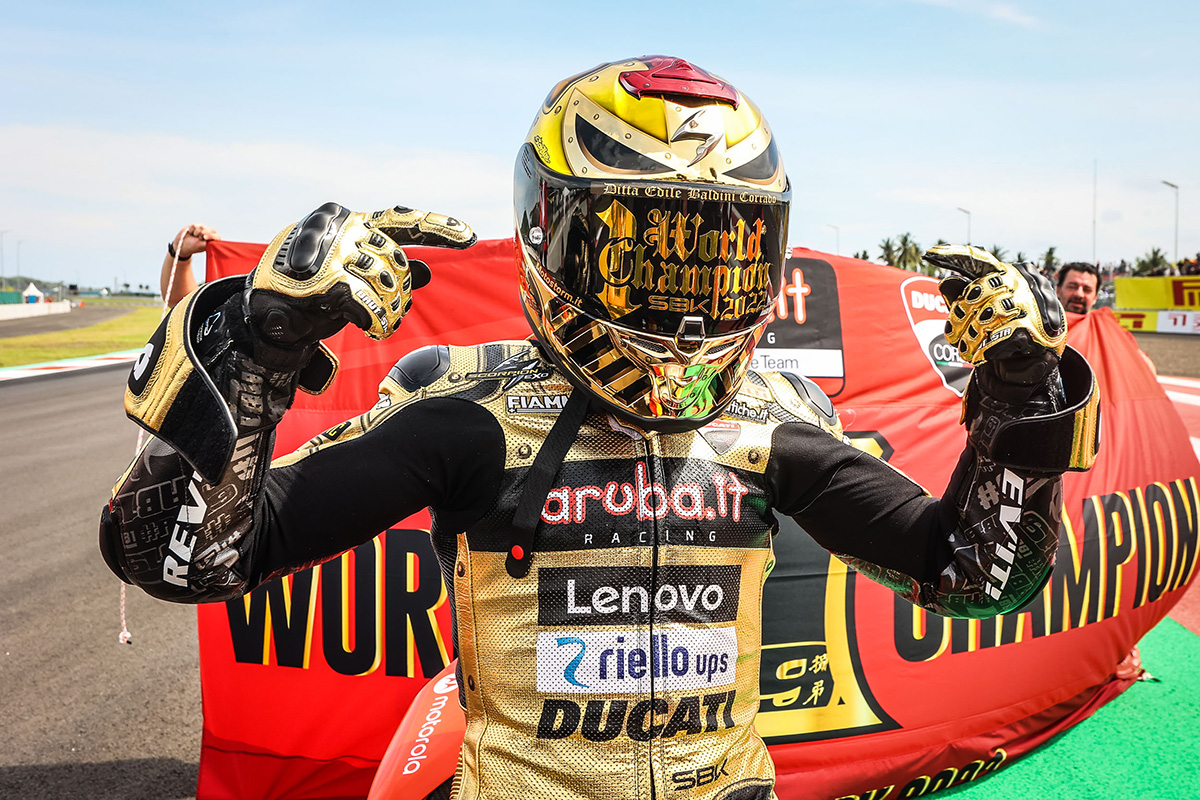 Bautista returned to Ducati for the 2022 season after two seasons away and did so in perfect fashion, taking his first win of the season in the Tissot Superpole Race at the season-opening Aragon Round. He also left MotorLand Aragon as the title leader following his Race 2 victory. Rea was able to fight back at Assen but that lasted for just one day as Bautista extended his lead again in Race 2, with the newly-crowned Champion leading the way from Assen’s Race 2 onwards. A Race 1 crash at Donington Park dented Bautista’s lead but he bounced back in style; taking 15 podiums in the 18 races that followed including a hat-trick at the Circuit de Barcelona-Catalunya. A crucial part of Bautista’s title-winning campaign was his fights with both Razgatlioglu and Rea, particularly with the 2021 Champion throughout the Estoril, Portuguese and Argentinean Rounds.

Bautista began his career in the Spanish Championship from 1995 to 2002. In 2002, he was fighting for the title until the final race. In the same year, he made his first appearance in the FIM 125cc World Championship as a wildcard. He became a 125cc Grand Prix winner in 2006 at the Spanish GP. With eighth victories claimed that season, he secured his first World Championship title. The Spanish rider then moved up to the 250cc class, claiming 28 podium places including eight victories. Bautista stepped up to the FIM MotoGP™ World Championship in 2010. During his eighth seasons in MotoGP™, he claimed three podium places and one pole position, with a fifth place as his best classification in the Championship standings in 2012. In 2019, Bautista made his WorldSBK debut with Ducati, finishing his rookie season with 16 wins, 24 podium places, 4 pole positions and 15 fastest laps as he secured second place in the Championship standings.

In 2020, he switched to Honda, racing for the Team HRC squad. Over the 2020 and 2021 seasons, he claimed three podium places for the Japanese manufacturer before returning to Ducati and the Aruba.it Racing – Ducati team for the 2022 season. With 14 wins and 29 podium places, Alvaro Bautista became the 2022 WorldSBK Champion at Mandalika. Bautista becomes the ninth different rider to take a Riders’ Championship for Ducati with the Italian manufacturer securing their 15th Riders’ Championship overall. He’s the third different rider in three years to take the crown, as well as being from a third different country and on a third different bike, emphasising the competitive parity in WorldSBK.

The newly crowned WorldSBK Champion will remain with Ducati in 2023 and both will aim to continue challenging many records.

Alvaro Bautista, Aruba.It Racing – Ducati:
“It’s incredible, I’m so happy. It’s a dream come true, especially after the last two years and all the difficulties. I want to say thanks to everyone who trusted me, to give me this chance to fight for good places and we got the Championship at the first time of trying. Today was the first time I felt a bit nervous or stressed, but it was in Race 2 on the grid before the start. I tried to manage the emotions and when I was in first, I was making a lot of mistakes because I had too many thoughts in my head! I just preferred to stay second behind Toprak, but he was very strong, so I could just follow him. So happy. It’s difficult to know what to say. I’m just so happy. During the whole season, I was so happy because I had a lot of experience from the past. I tried to be the best possible rider, not make mistakes. I think our performance has been really, really high. I think I had the best performance level ever from Toprak and Jonathan. They performed at a really high level in all races. I was lucky that I made fewer mistakes than them. What’s important is also consistency. I could beat Jonathan, a six-time World Champion and Toprak, a one-time Champion, breaking all the records at all the tracks which means the level is so high. We can win with this amazing level.”

Giulio Nava, Bautista’s Crew Chief:
“We worked really hard for this; this team and Ducati. I’ve been working with Alvaro for many years and I’m super happy to be here with him, seeing him achieving these results. It means a lot. I’m very lucky to work with him. You create very a strong relationship together. We joke together. Alvaro is like my brother. It’s difficult for me to explain what it means, but it means the world to see him winning.”

Luigi Dall’Igna, Ducati Corse General Manager:
“It is a wonderful day for us. We worked a lot with Alvaro in the past and in 2019 we did a fantastic job until the middle of the season. In the end, we could not win the crown. Today, in the end, and it was a fantastic emotion. It was a special day. This is probably one of the best seasons of his life. This year, and 2006, were two really amazing seasons for him. He won the 2006 125cc World Championship and today he won WorldSBK. He’s a real fantastic rider and I’m really, really happy he could get the title today.”

2022 world champion, Alvaro Bautista, worldsbk champion
Get All Our Latest News Sent Direct To Your Inbox
Join 30,271 other subscribers.
Follow on Social Media
Get the VROOM Podcast
Download our Vroom.GP App