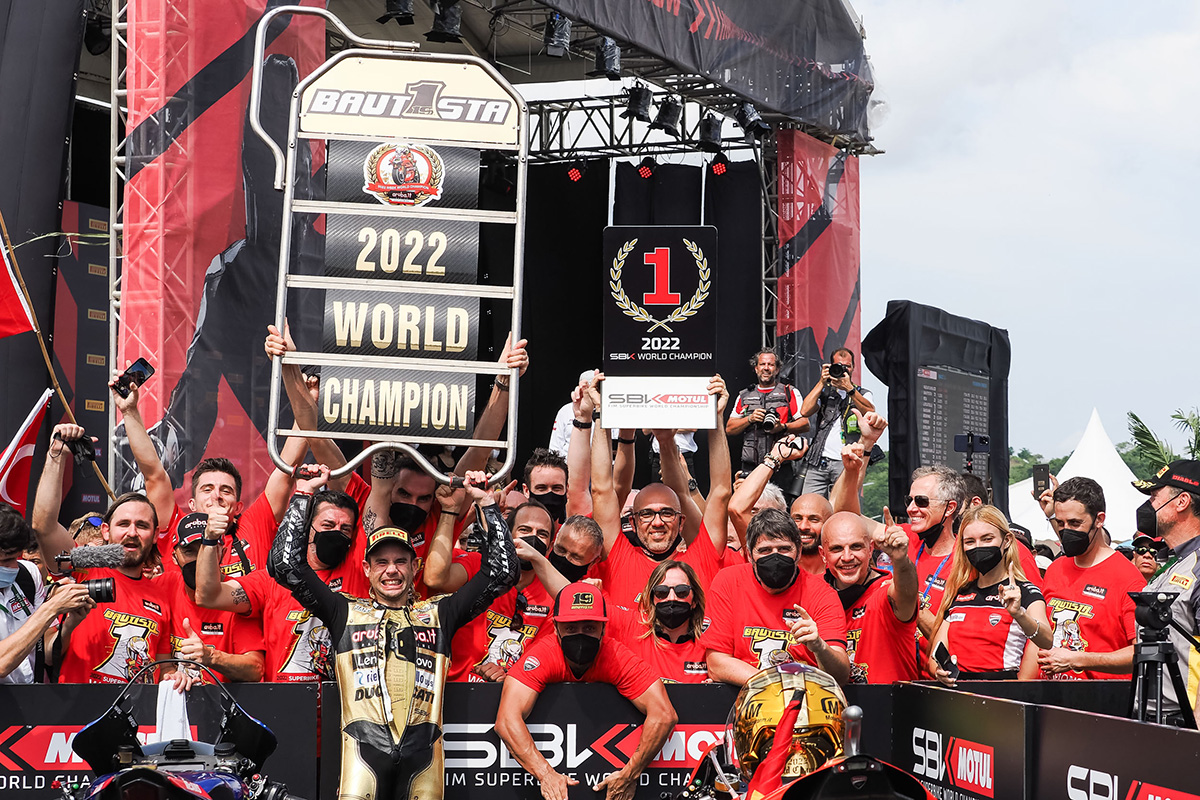 “For me it’s been an unbelievable weekend, in a Muslim country. Three wins… This is a very good weekend for me, I’m really happy. Congratulations to Bautista and Ducati. It was a really good season because we are fighting almost every race. We lost the Championship, but I tried my best. I won three times, and this is positive for me. We have a lot of respect. We are fighting but outside the track, we are talking to him like friends. I’m very happy for him to take the Championship this year, and also for him to ride the Ducati many years later. It’s a very good day for him. I remember it for me last year. I saw Alvaro in the gold leathers and I’m looking again because it was like my suit, very similar! Congratulations again, I think today is a Ducati day.”

“It’s incredible, I’m so happy. It’s a dream come true, especially after the last two years and all the difficulties. I want to say thanks to everyone who trusted me, to give me this chance to fight for good places and we got the Championship at the first time trying. Today was the first time I felt a bit nervous or stressed, but it was in Race 2 on the grid before the start. I tried to manage the emotions and when I was in first, I was making a lot of mistakes because I had too many thoughts in my head! I just preferred to say second behind Toprak, but he was very strong, so I could just follow him. So happy.”

“Sunday has been really positive. Like I said yesterday, I was quite content and satisfied with being on the podium. We were quite far from the race win. Today we were able to really close that gap. I could fight with Toprak for the Superpole Race. The rhythm was incredibly fast. So, I’m happy to be P2 there. In Race 2 today I felt something in the middle of the race. I couldn’t go, I was catching the guys at the front, and I felt like this could be good but again, last laps I just really struggled to get the best from my bike. Things were moving around a little bit. I just had to close the gap. My confidence was dropping because I was riding completely on the limit. Satisfied, as I’ve said we’ve made a good step. I want to thank my team for making a good step from yesterday.”

“I’m really happy about today because in the end, after yesterday, we understood a lot. We prepared very really for Sunday. Then, this morning it was really important to try to push in the Tissot Superpole Race. But I thought I could do it, so I trusted myself and I tried to give the maximum. Then, we started again from P3, so it was important. It was a really good Race 2. We fought a lot with Alex. It was really nice. It’s a very important weekend for me and it’s been positive. Now we have the last round to try again to push. I think I want to try to get some podiums because it’s one of my favourite tracks. I have a lot of motivation to finish the season.”

“Finally, I won the Independent Riders’ Championship. I’m really happy. Today, we made a lot a really good steps with the bike. Yesterday, I really couldn’t ride like I wanted. But today I felt good with the bike, I could stay with the top three guys. I only want to enjoy the moment. It’s really hot here so it’s difficult to have a normal race. You have to manage yourself physically, to stay focused on the race. I felt on fire. But anyway, we finished the race, we did our job!”

“The weekend was difficult with the track conditions. It was obviously hard for us to set the bike up because the track was changing all the time. Today was better for me. In the Superpole Race, I felt good with the bike and I was able to get a good result. And in the main race this afternoon, I felt pretty good, but I went off track again, trying to make an overtake and I lost the front group. I had a strong pace at the end of the race, I was catching, I passed two or three guys. The pace was there but I made another mistake. I was angry at myself for that because the pace was enough for the fourth position today so I could have battled with them. But we keep pushing, we keep trying and are looking forward to the next race in Phillip Island.”

The the Grand Ridge Brewery Australian Round will take place from the 18th to the 20th of November at the Phillip Island Grand Prix Circuit.

“It was a hot race. The conditions were very hot, we had 66 degrees of asphalt temperature. The humidity was really high. We tried to push really hard because today we had less pressure as we won the Championship yesterday. We went early to bed to be ready for today. The Ten Kate Racing Yamaha team did an amazing job. We tried something different this morning and they improved the bike. I hope Tuuli is ok, it’s sad he couldn’t ride until the chequered flag.  We tried to go full gas and achieve this. What we had this year is amazing. We won 16 races, 18 podiums … without my team, the technical support, the family, friends and the sponsors, we couldn’t have achieved this job and won the Championship with three races to go. But we try to enjoy tonight, have a good celebration with everyone and also the team deserves this party. Then we’ll go to Phillip Island to close the WorldSSP season in a good way!”

“It was a good race because we found something this morning in the Warm Up with the team. They worked very well, and I was able to be faster than yesterday. Today the bike was better, and I could go fast and recover some positions. Then it was a very good fight with Dominique. I saw he was going alone, and it was unlucky that the race was stopped with six laps to go. But it’s ok to finish in second place.”

“Same as yesterday, we finish third so a double podium is always good. And in Indonesia it’s always special. I want to do my best to win, and Kenan always tells me I can. I didn’t have the tyre to win so I couldn’t make it here, but I hope I can do it in Australia. My bike is perfect, the problem is only me. I have to improve myself. We just need to focus to the next race in Australia.”

#IDNWorldSBK
Get All Our Latest News Sent Direct To Your Inbox
Join 30,271 other subscribers.
Follow on Social Media
Get the VROOM Podcast
Download our Vroom.GP App