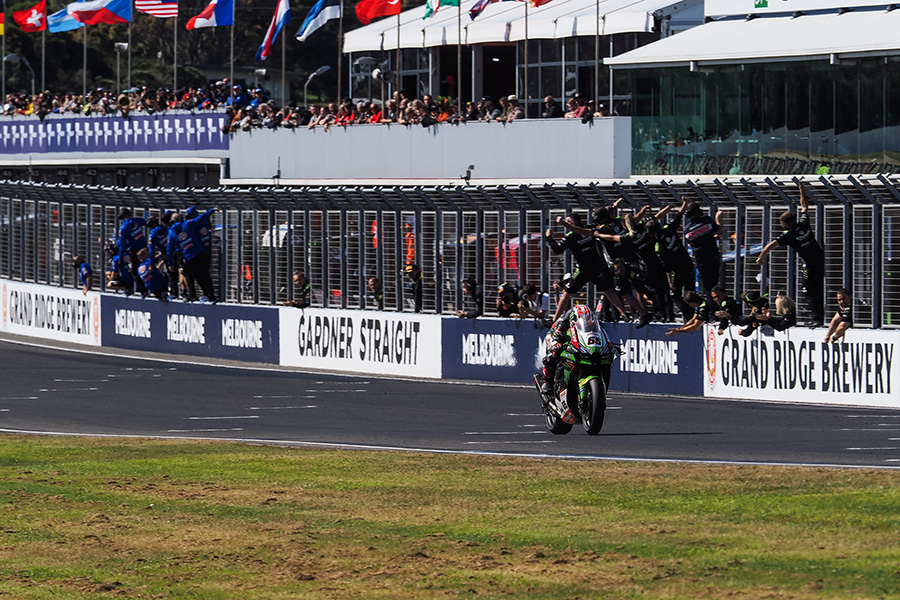 “There were a lot of things going on in that race and that’s what makes the victory a little bit more special because my team were involved in the pit stop. We could be strong in the wet conditions and also the dry, and I made that perfection decision to come in. it was even potentially a lap too late. I was thinking about coming in one lap earlier, but we made a deal with my team that I had to give them a signal on the pit straight. I thought I hadn’t given them the signal yet so came past so gave it one more lap and it was time. I quickly checked to see who was coming. I knew it was the perfect time. I saw Toprak was there so I thought the last ten laps would be with him. I exited the pit box and had a much better stop than Toprak and I could ride to my pit board.
It’s nice, it’s really nice more than anything to win. It’s not something I’ve really been dwelling on since the beginning of the season because the season’s been so challenging. Alvaro and Toprak have been so good so there’s no point in me getting disappointed or feeling sorry for myself. We’re getting beaten now by guys who are riding very well and manufacturers that are pushing really hard. It’s motivating to keep working, to keep following them and keep challenging myself and my team. I think we’re doing a really good job. Hopefully we can roll this momentum on to tomorrow and finish the season really strongly.”

“For me, this weekend didn’t have a good start but anyway my team was working to have a better bike. Now I’m happy. We finished the race on the podium. It was a strange race for me. It was my first race like this. I felt too much spinning on the rear and after I was not pushing on the tyre. I saw that Jonny was also not pushing. Then I saw he entered to the box and I followed him directly. My team made a small mistake during the pit stop, they struggled to put the front tyre so we lost almost five seconds. But anyway, this is racing, this is motorsport. We tried our best. We are here, in second place. Now I’m looking forward to tomorrow.”

“I didn’t expect it to dry as fast as it did. The race at the start, when I went off the start, it was a lot drier. The warm up lap was a lot drier than when we went to the grid. I need to be careful so I was trying to be smooth on the wet tyres, then I realised there was a dry line appearing so I tried to use the wet tyre a lot because I knew, at some point, we had to make a pit stop. I probably pitted one or two laps too late but when I got out on the dry tyres, I felt good straight away. In general, I’m happy. I think I have a good chance tomorrow whatever the conditions are. Really happy for the team and Jonathan getting back on the top step of the podium, me back on the podium.”

“Today was a fun race for the fans and for us because to stop to have a flag-to-flag was interesting. In the end we got fourth position so I think we can be happy. It’s a good result. I was fighting with Alex until the end and maybe finish in third position. My team did a really good job for the flag-to-flag, so I want to thank them. I’m really happy about today and about this race. We’ll try again tomorrow, and we’ll try to improve to try to stay closer to the front because we want to try to get a podium. This is the target, but we will see tomorrow what we can do.”

“It’s been a new experience for everybody, for me and also for the team, having a flag-to-flag race. In the beginning, it was strange in wet conditions because I had a worse feeling than this morning during the practice. I struggled a lot to have some temperature on the tyre and I was suffering a little bit even if I was in the front group. Then I saw that the track was drying step by step. But I wanted to be sure that we’ll have a clean line in the dry to make the switch. I switched the tyres. With the setup I had for the wet conditions, it wasn’t working so well for the dry tyres. I didn’t have too much confidence. On the front I couldn’t brake so hard because the bike started to move and jump a lot but also on with the rear tyre, it was like riding on ice. I needed five or six laps to start to feel some grip on the rear. I think this is a big disadvantage to be light because I cannot put weight on the lap in these kinds of conditions. We depend too much on the setup of the bike. If the setup is nice, I can push like I did in the Superpole where I did a really good lap time on the SC0 tyre. But when the race setting is not the right setting for me it’s difficult because the bike is more difficult to go into the corners and I cannot move myself to put some weight at the front or the rear. I am more limited than other riders. Anyway, I’m happy. It has been a new experience. We did a really challenging race. For sure we have some data for the future in case this happen again.”

“Complicated is the right word to describe this race. It was raining really hard after the Superpole session. I honestly didn’t think that it was going to be a dry race at all. But then, we were sitting on the grid, the track was still soaking wet, but the sun came out and the wind was hard. The wind was up there pretty hard. And I was thinking ‘alright this is going to dry’ and it did pretty quickly. In the race, I made a decent start and it didn’t feel too bad in the rain but honestly, I didn’t feel too fantastic either and I lost some ground. But staying around sixth, seventh place and then when the track started to dry, I was feeling pretty good, expect that I wasn’t really sure about when I should come in, because there were still a couple of places on the track that were pretty wet. I probably waited a lap longer than I should have. I saw Locatelli in front of me, he was with Bautista maybe, I saw him going into the pit and I was thinking like ‘do I do it or not’ but on the grid, I told my guys that I was going give them a signal before I come in so, I never gave them the signal so I didn’t want to catch them out. Anyway, they would have been ready, but I decided to do one more lap, giving them the signal so they were properly ready and in the end it was good.”
WorldSBK action resumes on Sunday from 10:35 (Local Time) with the Warm-Up, followed by Tissot Superpole Race at 13:00 and Race 2 at 16:00.

“It’s a first win and also a first podium for me. I’m really happy for this. Really happy for the team also because I think the last win of the team was in 2020. I enjoyed the race a lot, it was a great battle with Caricasulo. I enjoyed it because I think we were fast. At the start of the race, I pushed to the limit. I saw what Caricasulo was doing and I followed him. After two of three laps, I was feeling good so I thought ‘maybe I can try to push more’. I’m happy, we made some great overtakes and we enjoyed it. I’m disappointed for him but this is racing. We are now focused for tomorrow’s race. I think we’ll be fast on dry or wet conditions.”

“Difficult race because it was wet, and I never tried the Pirelli tyre in wet conditions. But I was fast. Good podium. Thanks to my team because they worked really well during the weekend. I was also fast in dry conditions so thanks to them. I was catching the front guys but then I started to struggle with the rear and to lose some grip. I preferred to secure the podium. We brought home this podium and I’m happy. I’ll try to be fast also tomorrow.”

“I finish third. I’m very happy. I’ve been lucky. Wet conditions are tricky. You can easily make mistakes. I thought that something would happen at the front because Caricasulo and Montella were really aggressive at the front. When I saw the crash, I thought ‘ok, third position is for me’. I wasn’t fast enough to be at the front. I wasn’t too comfortable, and I just wanted to finish the race to secure third place in the Championship standings. We were close with Bulega, so I just tried to take points. Then I was thinking one podium with third, so I was happy. Now we are third in the Championship. I’m incredibly happy for my team. I think today we did a not so bad job because my feeling was not so good, and we got a podium. If we improve the bike and my riding style a bit more for tomorrow, then we can fight if it’s raining and we are already ready for dry conditions.”

Federico Caricasulo (Althea Racing) crashed in the final lap of the race while he was fighting for the win. He managed to finish the race in seventh place.

Wildcard Marcel Schroetter (MV Agusta Reparto) did not finish his first World Supersport race as he crashed on Lap 6.

#AUSWorldSBK
Get All Our Latest News Sent Direct To Your Inbox
Join 30,271 other subscribers.
Follow on Social Media
Get the VROOM Podcast
Download our Vroom.GP App