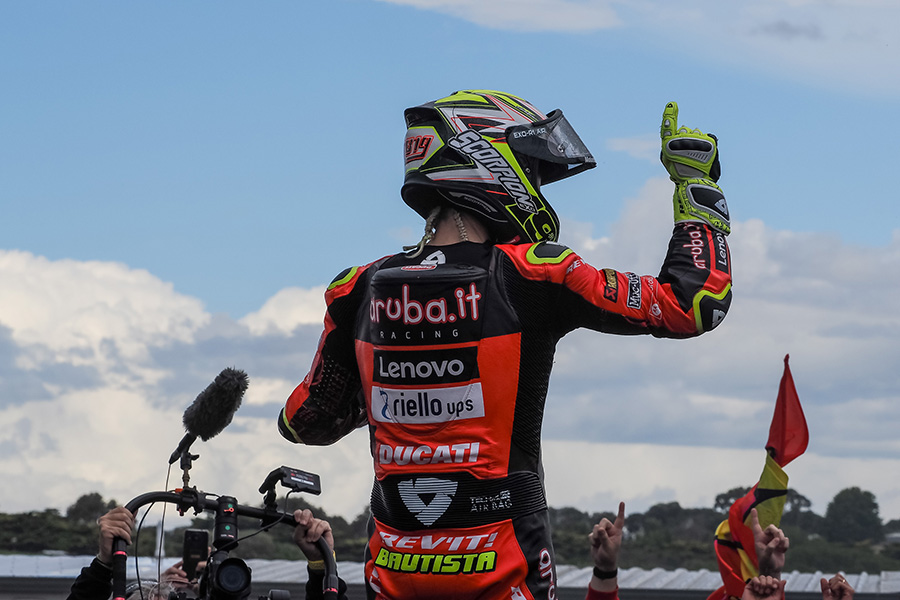 “Today was amazing! In the Superpole Race, it was quite wet, but the experience I had from MotoGP™, I knew that it could maybe dry very fast. I took a big gamble because it was too wet. Race 2 was again so fun with the bike. Today, everything was normal so I could push from the beginning. I lost a lot of positions in the beginning and then I got the lead. To make my pace, the pace was quite acceptable, and Jonathan was just behind. I expected a big battle, especially in the last two laps, but unfortunately the red flag stopped the race. I think it has been the best way to end this amazing season. I’m so happy. Now we have to celebrate and now we have to prepare for next season.”

“We know the result. I gave everything. We can be quite satisfied with our efforts this weekend to go 1-3-2. Good overall points for the weekend. The conditions were almost like nothing I’ve ever seen in my career! Tyre decisions, pit stops, red flag in Race 2 with the conditions coming in. From my weekend, I’m really happy with my team and the way I’m riding the bike. Even in Race 2 with Alvaro, I felt stronger everywhere but the start-finish line. They were taking so much time, but through Turn 1, Turn 2 and even Turn 3, with the traction, an area we’ve really struggled with in the past, I had more grip and the tyre was very linear. Big thanks to my team. Looking forward now to a little bit of rest before we start focusing on 2023. We can be satisfied with our work this year.”

“I’m really happy with the weekend, happy with the second podium this year. We’ve made some improvement in the middle of the year. I’ve been pretty competitive minus Mandalika, we’ve been strong every weekend. Today’s race was good. I was nervous because the weather has been changing so fast. In the race I was trying to check the clouds and understand what was happening. In the mid-part of the race, Jonathan and Alvaro just got away a little bit. I had some battles with Toprak and I couldn’t really get past him. And then I was trying to think about the end of the race, save some tyre to battle with him in the last two laps and then obviously we had the red flag. I really hope both of the guy are ok. But for me, it’s been a good weekend, nice way to finish, it gives me some confidence going into winter and on to next season.”

“We tried in every session to find good grip. We tried our best. In Race 2, after 10 laps, I felt a big drop with the rear tyre. I saw Alex pushing a lot, and after two laps I saw him starting to spin a lot. I thought ‘ok in the last two laps, I’ll pass him’ and I saw the red flag. But I’m really happy for him. He needed a bonus because he has two babies! He’s a very good guy and he was very strong this weekend. We finished the last race of the season in fourth position. Anyway, we’re second in the Championship standings.”

“For sure we finished the season in a really good way. This is very important to start testing this winter and to start 2023 in a good way. I’m really happy about the last two rounds. But I am little bit disappointed with some rounds, like Barcelona … maybe we could have fought for third place in the Championship … but anyway we finished a difficult season in fifth place, so we need to be happy, we need to look forward and we need to prepare next season and I think we will come back really strong. For sure, we improved.”

“Interesting race actually. I got off to a flying start which is something we’ve been working on this year. This weekend I found something that helped me with the start. So, it was quite good, and we had a great start. I struggled a lot this weekend and I tipped in to Turn 1 and thought ‘it’s the last race, give everything you’ve got’. I was hanging out there in the front for a bit, that was pretty good. I challenged for the lead a few times and then the tyre start becoming an issue. I started dropping back which was a shame because I felt pretty good. I was happy with the Sunday. Both races turned out alright after a really tough weekend.”

The race was red flagged after a collision involving Xavi Fores (BARNI Spark Racing Team) and Eugene Laverty (Bonovo Action BMW) at Turn 1, with Laverty taken to the medical centre for a check-up following the crash but he was conscious. Laverty was diagnosed with a pelvic injury and taken to Alfred Hospital in Melbourne by helicopter for further assessments.

Tetsuta Nagashima (Team HRC) rounded out a strong debut weekend as he stood in for Iker Lecuona with ninth place in Race 2, scoring a total of 13 points.

“I think we couldn’t finish the season in a better way! We won the Championship three races ago. Both years we took the Teams’ Championship, the pole position awards, the fastest lap! These two seasons were fantastic, we wrote some history. The race today was amazing. We were finally able to ride in dry conditions in the fantastic track at Phillip Island. There was some wind. I had a big battle with Caricasulo and Baldassarri, also with Bulega. I was trying to always stay in front. And once I saw I had a small gap I tried to push a little bit more so I can open the gap and that they couldn’t overtake me on the slipstream.

17 races won in one season with 19 podiums is just amazing. Again, a huge thanks to the Ten Kate Racing Yamaha team, they did a fantastic job to keep me always fully focused on racing. The team did a super job to prepare the bike because to ride 24 races without any technical issues, it means they have a lot of experience and are very precise. Without them I wouldn’t have achieved all of this! I will miss them next year, but we will have some nice celebrations together before I have the first Superbike test in mid-December.”

“After yesterday, I was so angry with myself. Everything was perfect but I missed only the last few corners. Today I wanted to be back on the podium. My target for this weekend was to give the team the first victory in World Supersport but yesterday was closer. I’m really happy about the weekend, we were fast in every condition, so I’m happy about that. To finish on the podium is important and I want to thank my team. We started from zero, with a new bike and everything new and now I think we have a very good level! My goal and the team goal is to stay together for 2023. The feeling is really nice with all the team, with Ducati. It’s been a really nice year on the sporting and personal side!”

“A great way to end the season. We had a nice battle for the fans but then Domi made a small gap and we were struggling to catch him in the last part of the race. For sure, we ended the season in a very good way. Yesterday we had a wet race, today was a dry one at the best circuit in the world. I want to thank my team, to Yamaha and to all the people who believed in me this year. Now I can’t wait to start a new challenge next year.”

Can Oncu (Kawasaki Puccetti Racing) was the first retirement of the race after he had a collision with teammate Montella, with the incident placed under investigation by the FIM WorldSBK Stewards and Montella was given a Long Lap Penalty for his role in the collision.

#AUSWorldSBK
Get All Our Latest News Sent Direct To Your Inbox
Join 30,271 other subscribers.
Follow on Social Media
Get the VROOM Podcast
Download our Vroom.GP App